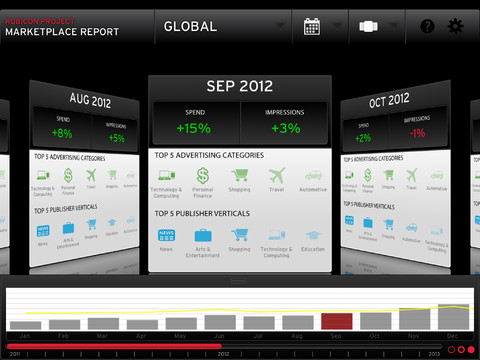 Since surpassing Google this past August as the furthest reaching digital ad network, Rubicon Project has continued to show why they are industry thought leaders in the Real Time Bidding (RTB) space. Rubicon Project contacted us to develop their Marketplace Report, which was to replace the monthly PDF with an interactive HTML5 mobile app with stunning data visualization sets.

Data is king, and Rubicon Project has a lot of it. The app included data across various verticals and countries and our challenge was to create a robust interface to complement the equally robust amount of information. Our designers were tasked to make these numbers resonate and easy to digest.

Figuring out where to start was a project within itself. When envisioning the app, we realized that we would need to start painting a picture for our users through these numbers. To meet this challenge the app was designed to recognize trends and highlight lists such as the top five advertising categories by spend and the top five publisher verticals by revenue. The app was also designed with both advertiser and publisher in mind and will show overall advertising spend and value shifts over a monthly and quarterly basis for various countries.